The Bellport Fire Department’s one firehouse is home to the Occumbomock Engine Company, the Eagle Hose Company, the Buzzard Hook and Ladder Company, and the Keystone Fire Police Company. The department also maintains a Heavy Rescue Squad and a SCUBA/Water Search and Rescue Squad consisting of qualified members from all its companies.

Each time the men and women of the Bellport Fire Department respond to an alarm they are continuing a 113 year tradition of service to their community.

The Bellport Fire Department and the community it serves owes a great debt to Mrs. Jacob Nelson Stout. In the late 1800’s a number of suspicious fires destroyed homes, barns and businesses in the area. These losses compelled the residents of the area to work together to form a fire department.

Holding ice cream socials, block parties, and carnivals, it took Mrs. Stout and others almost two years to raise the $600 needed to purchase property for a firehouse and $350 for the department’s first piece of equipment; a hand drawn hook and ladder wagon manufactured by the Gleason and Bailey Company of Watkins Glen, New York. An additional $750 was raised to construct a truckhouse on the corner of Woodruff Street and South Country Road. Today’s firehouse occupies this same site.

In September 1893, 32 men met for the first meeting of the newly formed Bellport Hook and Ladder Company. Elections for officers were held with Everett Price being elected the first “Foreman” or Chief of the Bellport Fire Department. Also at this meeting a constitution and bylaws were drawn up. Rules of the department called for a fifty cent initiation fee, ten cents a month dues, a dollar fine for missing fires or parades “without reasonable excuse,” and a hefty five dollar fine for “using fire department equipment in manner not pertaining to department duties.”

In 1897 the department added a second weapon to its firefighting arsenal with the purchase of a chemical truck from the Rex Fire Extinguisher Company of New York. A mixture of water and sodium bicarbonate was held in two tanks. The chemical tanks were pressurized by screwing a small container of sulfuric acid onto the tank and striking the container with a hammer. The acid/water/baking soda mixture combined to produce 100 pounds of pressure in the 32 gallon water tanks. Two tanks were used so one could be filled while using the other to fight a fire.

In October, 1905 the Eagle Hose Company was formed and was assigned responsibility for the chemical truck. A few years later in 1908 the department purchased a third piece of equipment; a hose wagon from local blacksmith Charles K. Shaw for $55. Also that year a Board of Fire Commissioner was formed with Charles K. Shaw elected its first president.

It was 1916 before the department purchased its first motorized truck. A REO “Flying Cloud” Motor Truck was purchased for $1045. Chemical tanks and other equipment were purchased and installed by C.K. Shaw’s blacksmith shop.

The Occumbomock Engine Company was formed in October of 1922. Also that year a siren was installed atop the firehouse. The siren sounded for the first time on Sunday, March 5, 1922. The switch to activate the siren was located in the local telephone office two doors from the fire department. When an alarm was phoned in the telephone operator would activate the alarm and then go to the truckhouse to inform the arriving firemen of the location of the blaze

In March of 1924 the department purchased for $6000 an American La France 350 gallon pumper equipped with chemical tanks, hose body, and 1000 feet of 2 ½” hose. Also that month four wells were drilled at strategic locations in the village. The wells cost $330 each to drill and were the forerunners to today’s hydrants. A year later in 1925, 27 more wells were drilled throughout the village.

Though wells were installed, the REO chemical truck was still a benefit to the department in November of 1925. An early morning fire in the Lucas Drugstore on the corner of Station Road and Main Street was controlled with the REO when the department’s pumper was unable to draw from nearby well. The chemical truck’s tanks were charged more than twenty times during the fire by a bucket brigade take water from a horse trough. Damage to the building was heavy but no one was injured. Today the exterior of this building looks remarkably the same as it has for the past 113 years.

The Chemical Trucks would again be called on in 1930 when a fire struck a barn located on Bell Street and Brown’s Lane. A dispute between the fire department and the water company delayed the signing of contracts allowing the fire department to access water from the available hydrants. Around midnight on November 17th a fire erupted in the barn owned by the Catholic Church. Only the chemical tanks could be used and the barn was a total loss. Legend has it firemen were also hampered that night when a large stockpile of fireworks in the barn ignited sending roman candles and skyrockets shooting in all directions.

By 1935 the department was quickly outgrowing its original truckhouse. Plans were started to build a new firehouse. It was October of 1936 when the plans were finalized and $20,000 bond issue was approved to fund construction. Bids were solicited with low bid of $17,946 winning by just $39. Among the items included in the bid was the silverware and china still used today by the department.

In 1945 American La France was contracted for a new hook and ladder truck. A long body truck with a 750 gallon pump, full compliment of ladders, overhaul tools, and a booster tank was ordered for $12,459.50. La France was delayed in delivering the vehicle until 1947 because of production and material demands made by World War II. The truck served as a department workhorse for many years and it’s bell today graces a memorial located just outside headquarters.

Two important innovations in firefighting were adopted by the Bellport Fire Department in the 1950’s. The first, in 1952, was the purchase of two way radios. A base station was installed at headquarters and one truck was equipped with a radio. Also purchased were two hand held radios. The second innovation was the purchase of the department’s first self-contained breathing apparatus (SCBA) in 1953. Two units were purchased and put in service after department members traveled to New Haven, Connecticut for training with the new equipment. The use of SCBA’s particularly in structure fires, is taken for granted today. Their introduction in fire fighting however is considered historic.

In 1956 American La France again was contracted to furnish the department with a new vehicle. A 500 gallon pumper that would serve the Engine Company until 1972 and then be put in the custody of the Hook and Ladder Company until its retirement in 1989.

In March of 1963 Bellport made headline news throughout United States when a disastrous fire struck Bellport High School. The school, located on the corner of Station Road and Kreamer Street contained nearly 1000 people when fire broke out in the auditorium shortly before the end of the school day.

The evacuation went smoothly except for a group of forty students and teachers whose exit from the second floor was blocked by dense smoke filling the stairwells. As the group retreated back to the second floor hallway smoke began to envelope them. About thirty student were overcome by smoke. Arriving firemen along with school workers and onlookers quickly raised ladders and began evacuating the second floor. Firemen found many victims passed out atop each other and had to lift the unconscious students through the windows to rescuers outside. Thirty-seven people were hospitalized, three in critical condition, after escaping through flames and smoke. The worst injuries were those sustained by two boys who were either pushed or jumped from second story windows and landed on concrete walks below.

The fire started in a back stage area of the auditorium and quickly climbed to the cockloft attacking the old and dry timber in the area and spreading to the gymnasium cockloft through holes left by various trades in the fire wall between the two areas. As the roof of the auditorium was of bow truss construction it was not long before the fire weakened the trusses enough to cause part of the roof to collapse.

Chief Robert Terwilliger along with 500 firefighters from twelve departments battled the blaze well into the evening. After the fire the water department estimated that 1,118,000 gallons of water had been pumped into the building. With the help of many people and many heroic acts that day, the toll in injuries, life and property could have been much greater.

In 1964 Bellport became the second department in Suffolk County to own a snorkel truck. Impressed by Westhampton Fire Department’s truck at the 1963 school fire, Bellport purchased a 75 foot aerial platform truck built on an International Harvester chassis. The truck had no pump on board instead relying on the department’s 1947 La France pumper to supply its water. The truck also had no roof over the cab as it would not have fit in the firehouse. Prior to delivery of the new truck the doors of the firehouse had to be altered to allow the truck to fit. The snorkel was a diverse piece of equipment, useful for both the department and the community. Aside from structural firefighting, the truck was used as an aerial observation platform during several large brush fires, was used to string Christmas lights on the village tree, and even served once to fill the tender of a steam locomotive at the Bellport Railroad Station.

The Bellport Fire Department’s one firehouse is home to the Occumbomock Engine Company, the Eagle Hose Company, the Buzzard Hook and Ladder Company, and the Keystone Fire Police Company. The department also maintains a Heavy Rescue Squad and a SCUBA/Water Search and Rescue Squad consisting of qualified members from all its companies. 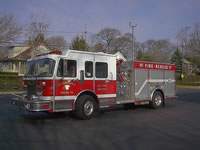 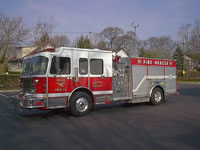 Eagle Hose CompanyThe Eagle Hose Company responds second due with engine 5-1-5, a twin to the Engine Company’s pumper except with the addition of built-in Hurst power tools for heavy rescue and vehicle extrication operations. 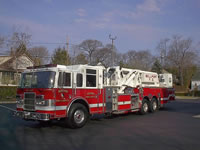 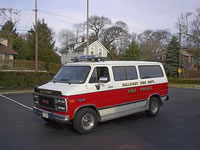 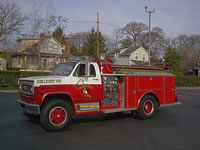 Allegheny Mini PumperAlso assigned to the Buzzard Hook and Ladder Company is this 1986 Allegheny Mini Pumper built on a GMC chassis. Carrying 500 gallons of water with a pump rated at 1000 gallons per minute, it has recently been upgraded with four telescoping floodlights to assist nighttime operations. 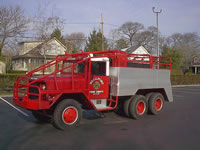 Parker Fire BoatFor fire or rescue operations on the water, the Bellport Fire Department responds using its 25 foot 2002 Parker Fire Boat. The boat now has a 200gallon per minute pump and permanently mounted deck gun mounted on the bow.